Interstellar forecast for a nearby star: Raining comets! NASA’s Hubble Space Telescope has discovered comets plunging onto the star HD 172555, which is a youthful 23 million years old and resides 95 light-years from Earth.

The exocomets — comets outside our solar system — were not directly seen around the star, but their presence was inferred by detecting gas that is likely the vaporized remnants of their icy nuclei. 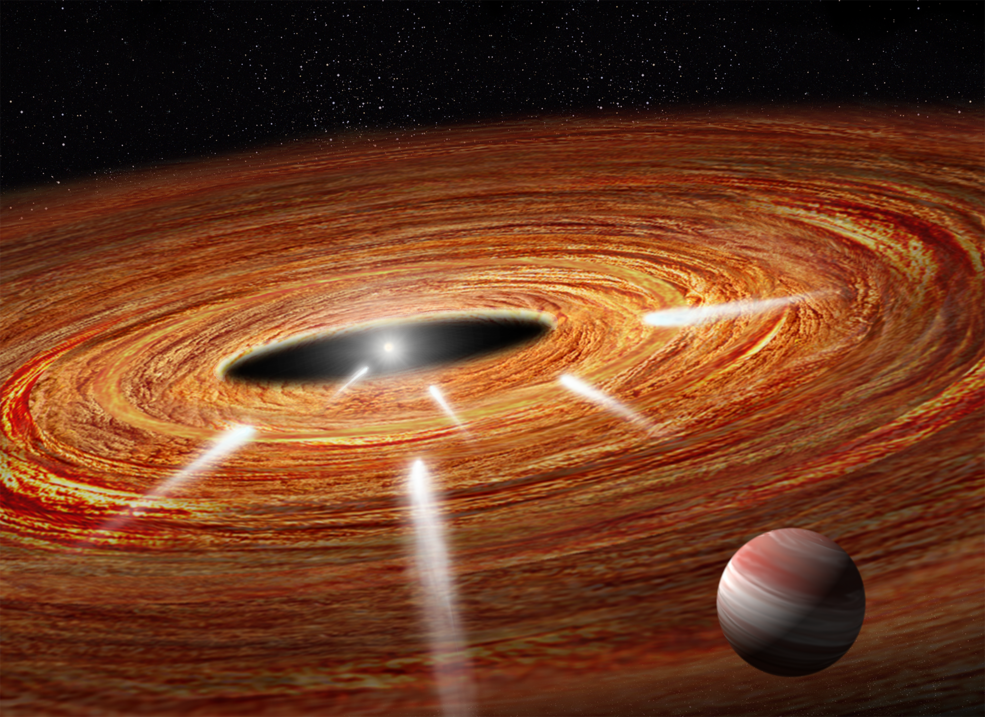 This illustration shows several comets speeding across a vast protoplanetary disk of gas and dust and heading straight for the youthful, central star. These "kamikaze" comets will eventually plunge into the star and vaporize. The comets are too small to photograph, but their gaseous spectral "fingerprints" on the star's light were detected by NASA's Hubble Space Telescope. The gravitational influence of a suspected Jupiter-sized planet in the foreground may have catapulted the comets into the star. This star, called HD 172555, represents the third extrasolar system where astronomers have detected doomed, wayward comets. The star resides 95 light-years from Earth.
Credits: NASA, ESA, A. Feild and G. Bacon (STScI)

HD 172555 represents the third extrasolar system where astronomers have detected doomed, wayward comets. All of the systems are young, under 40 million years old.

The presence of these doomed comets provides circumstantial evidence for “gravitational stirring” by an unseen Jupiter-size planet, where comets deflected by its gravity are catapulted into the star. These events also provide new insights into the past and present activity of comets in our solar system. It’s a mechanism where infalling comets could have transported water to Earth and the other inner planets of our solar system.

Astronomers have found similar plunges in our own solar system. Sun-grazing comets routinely fall into our sun.  “Seeing these sun-grazing comets in our solar system and in three extrasolar systems means that this activity may be common in young star systems,” said study leader Carol Grady of Eureka Scientific Inc. in Oakland, California, and NASA's Goddard Spaceflight Center in Greenbelt, Maryland. “This activity at its peak represents a star’s active teenage years. Watching these events gives us insight into what probably went on in the early days of our solar system, when comets were pelting the inner solar system bodies, including Earth. In fact, these star-grazing comets may make life possible, because they carry water and other life-forming elements, such as carbon, to terrestrial planets.”

Grady will present her team’s results Jan. 6 at the winter meeting of the American Astronomical Society in Grapevine, Texas.

The star is part of the Beta Pictoris Moving Group, a collection of stars born from the same stellar nursery. It is the second group member found to harbor such comets. Beta Pictoris, the group’s namesake, also is feasting on exocomets travelling too close. A young gas-giant planet has been observed in that star’s vast debris disk.

The stellar group is important to study because it is the closest collection of young stars to Earth. At least 37.5 percent of the more massive stars in the Beta Pictoris Moving Group either have a directly imaged planet, such as 51 Eridani b in the 51 Eridani system, or infalling star-grazing bodies, or, in the case of Beta Pictoris, both types of objects. The grouping is at about the age that it should be building terrestrial planets, Grady said.

A team of French astronomers first discovered exocomets transiting HD 172555 in archival data gathered between 2004 and 2011 by the European Southern Observatory’s HARPS (High Accuracy Radial velocity Planet Searcher) planet-finding spectrograph. A spectrograph divides light into its component colors, allowing astronomers to detect an object’s chemical makeup. The HARPS spectrograph detected the chemical fingerprints of calcium imprinted in the starlight, evidence that comet-like objects were falling into the star.

As a follow-up to that discovery, Grady’s team used Hubble’s Space Telescope Imaging Spectrograph (STIS) and the Cosmic Origins Spectrograph (COS) in 2015 to conduct a spectrographic analysis in ultraviolet light, which allows Hubble to identify the signature of certain elements. Hubble made two observations, separated by six days.

The gaseous debris from the disintegrating comets is vastly dispersed in front of the star. “As transiting features go, this vaporized material is easy to see because it contains very large structures,” Grady said. “This is in marked contrast to trying to find a small transiting exoplanet, where you’re looking for tiny dips in the star’s light.”

Hubble gleaned this information because the HD 172555 debris disk surrounding the star is slightly inclined to Hubble’s line of sight, giving the telescope a clear view of comet activity.

Grady’s team hopes to use STIS again in follow-up observations to look for oxygen and hydrogen, which would confirm the identity of the disintegrating objects as comets.

“Hubble shows that these star-grazers look and move like comets, but until we determine their composition, we cannot confirm they are comets,” Grady said. “We need additional data to establish whether our star-grazers are icy like comets or more rocky like asteroids.”

The Hubble Space Telescope is a project of international cooperation between NASA and the European Space Agency. NASA Goddard manages the telescope. The Space Telescope Science Institute (STScI) in Baltimore, Maryland, conducts Hubble science operations. STScI is operated for NASA by the Association of Universities for Research in Astronomy in Washington, D.C.

For images and more information about the exocomets in HD 172555 and Hubble, visit:
http://hubblesite.org/news/2017/02
http://www.nasa.gov/hubble